A center for the arts: Partial renovations unveiled, $1.4 million needed to complete project

SHERIDAN — Approximately 100 people gathered Tuesday evening for the unveiling of new renovations to the WYO Performing Arts and Education Center.

The completed areas are the lobby and first floor, which include a new dance studio, green room for performers and extended wing space behind the theater stage. The dance studio served as a de facto cafeteria Tuesday, as visitors were treated to hors d’oeuvres and small desserts. The exterior of the former Hallmark building is finished as well, with false balconies and window designs.

The second and third floors, which will eventually have permanent office space, classrooms, music studios, a children’s theater and more, are still under construction. About $1.4 million in fundraising is needed to complete the $3.7 million project.

“We have raised enough money to continue work, which is very exciting,” said Erin Butler, WYO Performing Arts and Education Center executive director. “We have not raised enough to finish the work, but at least we’ll be able to utilize the space in a fashion.”

Butler said parts of the second and third floors will be available around February of next year. There is not a timeline for when everything will be finished. Butler said it would be great to have everything completed by next September, but she added that is probably unrealistic.

The ceremony Tuesday began on the sidewalk, as four people gave opening remarks. A tarp covering some of the Hallmark Building was then lowered to reveal the new exterior.

Gene Sturlin, chairman of the WYO Theater board of directors, thanked the various local groups, including Whitney Benefits and the Sheridan College Foundation, for contributions to the project. He called the theater “the jewel of downtown Sheridan” and “something unique in all of Wyoming.”

Sheridan College President Dr. Paul Young said the new dance studio will be “a learning laboratory” for dance and theater students at the college, who will begin taking classes there next semester.

Young said he was the luckiest college president in America because of the local financial support the college receives.

Sheridan Mayor Roger Miller and Whitney Benefits President Tom Kinnison reiterated their thanks to the people in attendance. Kinnison said he was proud to have the renovations completed during the week of the 100th anniversary of Edward A. Whitney’s death. Whitney died Nov. 17, 1917.

“Look at what we have in the center of Sheridan,” Kinnison said. “Wow.”

The overall crowd feeling was one of excitement, belief that the ongoing project is worth the investment. Roger Wilson has attended performances for more than 40 years and said he is anxious to see what the buildings look like when they are completed. He particularly liked the exterior aesthetic and believes the renovations will have a positive impact.

“It raises the cultural level and the opportunities for people here in Sheridan, especially the youth, to experience art,” Wilson said.

“Arts are very important to the people in this community and this is the topping on the cake,” he said. “I don’t know where you’d ever see anything like this in any other community of our size.”

Butler was pleased with the turnout and community reaction. There were a few difficulties leading up to the unveiling, like fixing the elevator, but she said everything went pretty well.

Each new aspect gives Butler a different reason to be excited. The lobby provides a more welcoming, less cramped atmosphere. The dance studio is a central location and helps the college dance program. The expanded wing space will allow the theater to bring in larger performances.

“It just gives us more wiggle room,” she said. 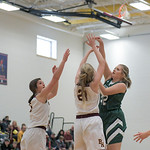