SHERIDAN — One hundred fifty million years ago, northern Wyoming had a lush, swampy climate. Dinosaurs roamed the land, eating their fill of the green vegetation that was all around them.

When those dinosaurs died, some of them were overtaken by mudflows, which preserved their remains for an exceptionally lengthy period of time. Some of those remains can be found at the Sheridan College dinosaur quarry area, south of Buffalo at the foot of the Bighorn Mountains.

For about the last 25 years, the college has leased 640 acres of private, off-road land from Caza Ranches. It is not a typical quarry, as the land is mostly uneven terrain, some of which has been dug up by a backhoe and paved by bulldozer.

Dave Nicolarsen is a volunteer who has been in charge of maintenance of the land for about five years. He took over those responsibilities when Mike Flynn, a former Sheridan College geology and paleontology instructor, retired from teaching. A trained geologist, Nicolarsen currently works part time for SWCA Environmental Consulting.

All of the dinosaur remains are found in the Morrison Formation, a type of sedimentary rock that is between 158 million and 146 million years old. Most of the remains found at the quarries come from sauropods, which were massive creatures with four large legs, long necks, long tails and relatively small heads.

Caesar, the allosaurus on display at the Sheridan College Whitney Center, is based on remains found on the quarry site by college faculty and students in the 1990s. The remains are about 152 million years old. Forty percent of the allosaurus’ remains have been discovered so far, the most of any single dinosaur on the site. Nicolarsen said Sheridan College President Paul Young jokingly told him to continue digging, so that there could be a dinosaur in each campus building.

Fossils or bones are found every time someone visits the land. They are usually small fragments, which are collected and taken back to the college to be cleaned, analyzed and stored. There have been more than 2,000 pounds of material found on site in the past 25 years, Nicolarsen said.

Even with more than one ton of bones and fossils discovered, only a tiny percentage of the land has been excavated. The two quarries currently measure about five and four acres, respectively, and are only around 6 feet deep.

Nicolarsen said dinosaur remains would likely be found at every depth for thousands of feet, but digging more than a few dozen feet is far too costly and time-consuming. However, mining the surface level can still lead to big discoveries. In recent years, volunteers have found five vertebrae bones, three femur bones and one large limb bone, most likely belonging to a brontosaurus.

There isn’t as much excavation going on as in the past, when Flynn would regularly bring his students to the site. Younger students occasionally visit the quarry and dig for a few hours as part of Science Saturdays. The event last month was canceled due to rain, however, so students will have to wait until next year, since the snow and frozen ground make digging too difficult.

Dinosaur fossils and bones are not the only type of remains on site. Nicolarsen said fish scales are occasionally found, and old deer horns have also been discovered. Some dinosaur footprints that were preserved in mud were also found.

Nicolarsen said he hopes the college keeps the lease, so future generations can continue the work that began more than two decades ago. Still, even if students and volunteers only scratch the surface of the entire 640 acres, Nicolarsen said it would probably take another 100 years to do so. But what is another 100 years to something that’s been preserved for 150 million? 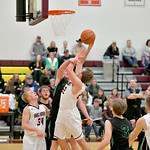