‘Fixture’ at King’s moves to Brinton

SHERIDAN — On Wednesday at King’s Saddlery on Main Street, Jim Jackson looked up from the intricate design he was tooling into a leather belt to chit-chat with passersby. They admired his work and wondered how long he’d been at King’s.

He smiled gently, his gray hair warmly lit by the studio lights overhead, and joked about being a “fixture” at one of Sheridan’s iconic businesses. Maybe that was why they moved him into the museum 20 years ago, he said.

It is fitting, he added, that he is moving to another museum to begin his semi-retirement.

Beginning Monday, Jackson will wake up to four wide open days to paint at his home studio. On Fridays, Saturdays and Sundays he will craft leatherworks in his new shop at The Brinton Museum.

“He is living history is what he is,” Brinton Museum Director and Chief Curator Ken Schuster said.

He meant it in the best possible way, a compliment to a man who has kept traditional cowboy art alive — and given it new life by blending the applied art of leather carving with his passion for fine art.

Jackson is known for framing paintings with intricately carved leather and weaving leather art directly into his images, an ideal complement to renderings of Western and American Indian culture.

Jackson is ready for the change — but sad, too, as he leaves his little corner in King’s Saddlery.

The Kings have been so good to him over the years, it’s like leaving family. He says Bruce King is the best boss in the world, and he will miss the people he’s worked with the most.

Jackson began stamping belts for King’s in 1974, did piece work for the business while earning his bachelor’s and master’s degrees in fine art at the University of Wyoming, and returned to do custom work full-time in 1989. Before returning to Sheridan, he worked as an artist, a time when his paintings were featured in renowned galleries in Denver and he was commissioned to paint an 85-by-15-foot mural of the San Diego Symphony.

Leatherwork is carved into Jackson’s nature. His father was a saddlemaker, and he began tooling leather in high school. He feels fortunate to have made a living making custom wallets, belts, purses and more for locals and tourists alike. He treated every order as a work of art.

Jackson worked five or six days a week at King’s, eventually moving his shop from the basement to a corner of the Don King Museum where visitors enjoyed watching him create the designs echoed in saddles and leatherworks all around him.

In the evenings at home, he painted — his other passion. As he aged, he desired more time and freedom to create the art he wanted to create. Now he can.

Jackson has set up shop in the bunkhouse on the grounds of The Brinton Museum.

He will build pieces for the museum gift shop and looks forward to creating unique works of art that combine his painting and leatherworking skills.

“To me what’s important in a piece of work, whether it’s leatherwork or painting, is that it operates on more than one level,” Jackson said. “If it’s only operating on one level, it’s boring. Once those different levels start operating it gets deeper and deeper into your own connections.”

Schuster, who worked with Jackson as a curator at the UW Art Museum in 1983, sees the addition of Jackson’s leather shop supporting The Brinton’s recent partnership with the Traditional Cowboy Arts Association. Jackson will help the museum preserve Western arts and be key to educational programs as he gives lectures and workshops and helps curate shows.

Schuster hopes visitors will take time to visit Jackson’s leather shop and the rest of the gems on the grounds of The Brinton Museum.

“Everyone recognizes him as a superb talent,” Schuster said. “It’s once in a lifetime a guy like that comes along. We are very pleased and feel honored to have him as part of our institution.” 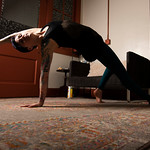 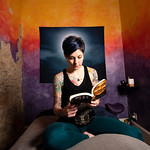